Continuing on with our #MensHealthWeek series, today we talked to Dr. Michael J. Rovito. Dr. Rovito is an Assistant Professor of Health Sciences at the University of Central Florida and holds a Ph.D. in Public Health, an M.A. in Urban Studies and a B.A. He is a Certified Health Education Specialist and the founder of a nonprofit called The Male Wellness Collective. His work specializes in testicular self-examination and testicular cancer, male health behavioral change, and formative research.

INTERVIEWER: If you could just start and just tell me a little bit more about your background and what got you into the field of men’s health, that would be wonderful.

DR. ROVITO: Sure. When I was a teenager, I had a testicular cancer scare. It ended up not being cancer. It was something called a varicocele. But the take home is that I realized that I had no idea what it was and couldn’t find out what it was. I had no idea where you get this type of information in the mid-90s. There was no internet like today back then. I kind of kept this to myself for a while, and I was very much afraid and anxious.

I finally told my parents about it, and they got me some help from a urologist. I learned that a varicocele is something that can cause sterility. It was kind of unfortunate that I really no idea about these things, and even more unfortunate that if someone did experience something like this that there’s no information available.” So, we needed to do something about it.

INTERVIEWER: Wow, that must have been really scary.

DR. ROVITO: It was. I said to myself, “If you have a chance to work with men and guys, I’d love to be able to inform them about their health issues and make them not as scared, afraid, and anxious as I was.”

After I received my Ph.D., I had the opportunity to complete my dissertation on testicular cancer. Then, a few years later, my wife and I started up a nonprofit called The Male Wellness Collective. Her background is in maternal and child health and public health. We were called the Men’s Health Initiative before. We rebranded this month into The Male Wellness Collective. I started back in 2010 as a little research group but then it sort of transitioned into advocacy when I met my wife.

INTERVIEWER: Nice. What does this group do?

DR. ROVITO: We provide education to help males develop their strengths and skills. We’re also trying to foster agency with them so they can build a healthy life. We’re trying to support them to practice wellness so they can continue on their path to achieving health and wellbeing. That’s where my passion and my heart lies.

INTERVIEWER: Wow, that’s really great. Shifting a bit, what research trends are you seeing in regards to men’s health as compared to other gender demographics?

INTERVIEWER: What do you think should happen next in research?

DR. ROVITO: I think the next step should happen now is, “Okay, but now what?” I’m waiting for the next generation of research to kind of say, “Okay, now we have a better idea of what the problems may be. Let’s try and fix it.” The research I find really exciting is self-worth. Like, what do you find meaningful in your life? Having guys define that for themselves instead of hearing some singular type of worth defined for them is proving to be really interesting. It’s still an emerging area, but I like that research area.

INTERVIEWER:  Jumping off of that, I saw a blog that was widely shared by the Global Men’s Health Initiative. One of the quotes kind of relates to what you were just saying. It stated that the evidence is clear that masculinity can be harmful to the health of men. Can you talk about the evidence surrounding masculinity as affecting men’s health?

This “idea of man” and what guys want isn’t all guys. Like the perception that guys want to eat meat, have sex all the time, beat their chests, and drink Powerade for breakfast and protein shakes is not all guys. These specific types of behaviors are becoming popularly known as toxic masculinity or hegemonic masculinity.

INTERVIEWER: How does that translate into health behaviors?

DR. ROVITO: When [the stereotypical behaviors are] getting all the attention, some men can kind of start emulating them. That’s where it’s harmful to a guy’s health because a lot of these “man behaviors” are toxic to male health. They actually just make you live less long and they make you live sicker.

INTERVIEWER: In just exploring off of that a little bit, even though there’s so much research that shows that men have worse health outcomes than their female counterparts, why do you think there isn’t necessarily a bigger focus on men’s health?

DR. ROVITO: I mean, the joke is, once you got to a pediatrician’s office, you’re not going back into doctors until [someone] makes you go.  We’re told, “This is what you do. Suck it up. Scrape it off, shake it off, and you don’t really say anything.” So you’re told these things when you’re 8 years old. Your friends reinforce it when you’re 13. You see it in the news when you’re 18. It just rings in your head and you become this robotic automaton just walking around acting emotionless just holding it all in. And we end up not going to the doctor.

DR. ROVITO: I don’t blame the healthcare industry because they are a business and they need consumers. Men are [generally] not really great consumers. So, why actually put money into it when they know they’re not going to make their return on investment? There are some great people out there…there are some great nonprofits and clinicians out there that actually focus on men’s health, but they’re few and far between. I’d love to see more, we just need to find ways to get more guys interested in using the service.

INTERVIEWER: So, kind of a supply and demand situation.

DR. ROVITO: There are hospitals for women only, there are clinics for women only. But hardly any for guys. Guys are probably partially to blame because they act like they don’t want to go use it. There’s a lot of startups for men’s health and I see them fail a lot of times because of lack of use.

DR. ROVITO: Ireland is big on Men’s Health policies and so is Iran. I think Great Britain and Canada were dipping their toes in the water. But here in the States, we’re trying to create a policy, but it’s really difficult because of the contention surrounding men’s health, particularly when you bring in the idea of masculinity.

INTERVIEWER: Do you see the same patterns in other countries with similar healthcare systems?

DR. ROVITO: In the UN, they create these enormous documents about family health…it’s called the Global Strategy for Women’s, Children’s and Adolescent’s Health. Anything surrounding men was mentioned twice in a 100-page document. And I understand it. There’s disparity out there. It is truly overwhelming what women have to face in daily life in many different places. But fathers and husbands are part of the health of families, and a central part of family life. For us to ignore a father’s health or a man’s or a husband’s, that’s going to affect their family. Especially in cultures where the man is the central part of the family ecosystem; we have to take that all into consideration. 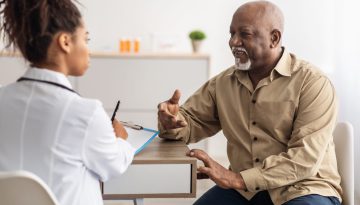